When Robin* was 8 years old, his life started becoming overwhelming. “Everything started coming in on him at once,” says Linda,* his mother. The fifth-grader, who has severe hemophilia A and lives in a suburb of Milwaukee, became the target of bullying at school. Then he was hospitalized after he suddenly developed gastrointestinal bleeding. “He had dozens of needle pokes in just a few days, and it just caused him such pain and such distress,” Linda says. “The whole situation was so frightening.” Robin was later diagnosed with depression and anxiety. During the next few years, the family pursued several types of treatment.

About 2 million kids and teenagers in the US who are 12 to 17 years old had at least one major depressive episode in the previous year, according to a 2008 report from the Substance Abuse and Mental Health Services Administration, part of the US Department of Health and Human Services. Given the special challenges of coping with a chronic illness, those with bleeding disorders may be especially prone to depression. According to experts and those with personal experience dealing with depression among people with hemophilia, parents can make a big difference. By learning and recognizing the signs and seeking help for their kids, parents can be depression detectors.

[Steps for Living: The Emotional Side of Bleeding Disorders]

The Seeds of Depression

“I was probably somewhat depressed from the age of 13 or 14 on,” recalls Ian,* 27, a software developer in Ontario, Canada, with severe hemophilia A. The depression became magnified late in his teens. Ian remembers spending long periods in the hospital throughout his childhood due to severe bleeding episodes and joint problems. “When I was 3 or 4, I was only home maybe 5 weeks,” he says. Though Ian had a few close friends, maintaining friendships with others was difficult. “Being away from peers so often, I missed out on a lot of the socialization,” he says. Throughout Ian’s childhood, his painful joints limited his physical activity, setting him up for a long-running struggle with his weight, which added to his feeling of isolation.

A variety of issues can contribute to depression in young people with hemophilia, says Katherine Loveland, PhD, a professor of psychiatry and behavioral sciences at the University of Texas Medical School in Houston. Kids with hemophilia can be prone to depression and their parents may have a tendency toward anxiety, she says. “That’s not their fault. It’s just the way life works out.” Some of the factors that may be associated with the risk of depression in kids with bleeding disorders include:

However, some of the challenges kids with hemophilia face are shared by children without a chronic condition. “When kids have a chronic illness, they’re still, first of all, children,” Loveland says. “Don’t attribute everything to their chronic illness.” Kids with bleeding disorders can become depressed due to the same issues that would bother other kids, like bullying, in Robin’s case, or parents divorcing, which occurred when Ian was young.

[Steps for Living: Sticking Up for Yourself]

Linda’s tipoff that Robin was struggling came with signs that some parents might not associate with depression. “He started having issues with sleeping through the night and wanting to avoid school. Something was going on that I didn’t know about.” Once Linda started asking her son probing questions, Robin revealed he was being bullied.

ImageState/Jupiter ImagesThompson’s research has shown that most young people with chronic illnesses don’t have depression. But those who do, more often have internalized problems instead of externalized issues. They may be more likely to have anxiety and depression simmering inside, as opposed to throwing temper tantrums or talking back to teachers and parents. “Internalizing disorders are not obvious,” Thompson says. “They need someone with sensitivity to be able to pick them up.”

Depression may affect young children in a general way that’s harder for them to describe or for adults to pinpoint, Loveland says. They may not cry more often or appear visibly sad. Because they’re still developing, they don’t process their emotions like teens or adults. Younger kids often don’t have the language skills to express how they’re feeling.

Teenagers with depression may become more lax in controlling their bleeding disorder, Loveland says. “They may say, ‘Why do I have to do this? I don’t want to do this anymore.’” (For other signs, see the sidebar “Depression Detection.”) Parents who pick up on these red flags can be powerful advocates in helping their children cope with their depression.

Ian kept to himself throughout childhood, reading and playing video games and not really opening up to friends or his family. “My parents were always there, but we didn’t really have the family structure to talk about things,” he says. Eventually, Ian started seeing a counselor and began taking antidepressant medications that a physician prescribed.

Some approaches to prevent and treat depression are to:

Engage in interesting activities. While some sports aren’t appropriate for children with bleeding disorders, plenty of activities may interest your child. Being engaged in appealing hobbies, sports and other activities lets kids focus their attention on something aside from their disorder. It allows them to interact with other kids with similar interests and pursuits, and helps them develop skills that other kids can appreciate.

Since his late teens, Ian has devoted himself to music. “Playing guitar is one of the most important grounding factors in my life,” he says. Despite his considerable joint problems, he also makes regular exercise a priority. Ian tries to go to the gym two or three times a week to do strength training and get a cardio workout on a recumbent bike. Physical exertion not only helps boost Ian’s mood, but also controls his weight.

Socialize with peers with hemophilia. Linda noticed a major improvement in her son after he went to a summer camp for children with hemophilia. “He came back a different kid: positive and willing to take responsibility for his own disorder. He really turned the corner.”

Get professional help. When Robin’s parents realized he was struggling with depression, they first sought help from the staff at his hemophilia treatment center (HTC). The social worker referred Robin’s parents to a local therapist. The therapist worked with Robin weekly for two years using a variety of approaches, including hypnosis and relaxation exercises, which his mother says were helpful. Your HTC can be a good place to start to find mental health workers in your area who treat children and teens with depression.

Robin also visited a psychiatrist and briefly began taking an antidepressant. But after a few months, he had an out-of-control outburst of anger, and his parents took him off the medication. The depression now seems to be behind him, and he’s no longer in counseling or on any other treatments, his mother reports.

The combination of counseling and medication can be helpful. Many people do better if they use both approaches, says Loveland. (As a psychologist, she is not authorized to prescribe medications.) “Medication is not the magic bullet, but it very often will help. It can make a big difference in a child’s life,” she says.

However, there have been some concerns with prescribing depression medication to children. The Food and Drug Administration (FDA) has issued a “black box warning” on all antidepressant medications used for children and adolescents up to age 24. This caution label states, “Antidepressant medications are associated with an increased risk of suicidal thinking and/or behavior in a small proportion of children and adolescents, especially during the early phases of treatment.” The warning is not a ban on antidepressants. The FDA stressed that depression itself is a leading cause of suicide and suicidal thoughts.

Parents of kids or teens taking the common antidepressants known as selective serotonin reuptake inhibitors, or SSRIs (Prozac, Zoloft and Lexapro), should watch for suicidal thoughts or actions, worsening depression or changes in behaviors, such as agitation or sleeplessness. Youths who are contemplating suicide may make statements like, “I’m not going to be around here much longer.” Another signal is when they give away or throw out favorite possessions.

If stressful situations are contributing to chronic depression, it’s important to address them directly and not rely on medication to improve a child’s mood. Further, make sure healthcare providers are aware that a child has a bleeding disorder before they prescribe any medications for depression or anxiety.

When she looks back on this phase in her son’s life, Linda says, “What surprised us with the depression is that we could have such a positive approach and outlook—and be doing all the right things—and still have a kid who faced depression. Robin still has some challenges, but he really has done well. We couldn’t be more thrilled.”

* Robin and Linda’s names have been changed, and Ian’s last name has been withheld, to protect their privacy. 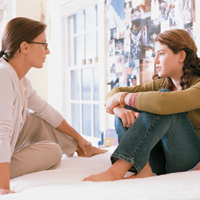 Children and teenagers with depression may have different signs than adults who are depressed. Their symptoms may include:

Information adapted from “The Depressed Child,” a fact sheet from the American Academy of Child and Adolescent Psychiatry.